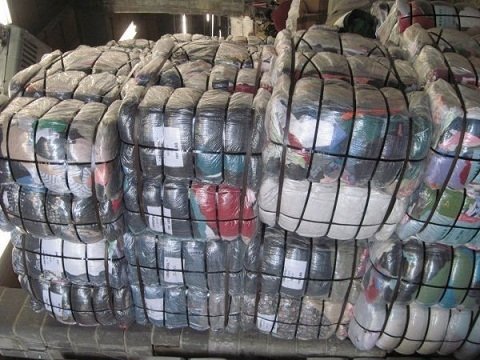 VICTORIA FALLS (The Citizen Bulletin) — The COVID-19 pandemic has remodelled livelihoods, with some citizens being forced to engage in various activities to eke a living and provide for their families.

Some of the activities put their lives at risky, while others puts them closer to jail in they are to be caught.

While COVID-19 affected most sectors of the global economy, it is the tourism sector that has suffered the huge effect due to lockdowns and travel restrictions.

People in the resort city of Victoria Falls in Zimbabwe are among those affected by the impact of COVID-19 on the tourism sector.

Most of them lost jobs in 2020 when the country instituted its first lockdown measures upon recording the first case of COVID-19.

Shylet Buta used to work as waiter at one of the Hotels in Victoria Falls but her contract was terminated when the country closed businesses due to COVID-19.

She is now engaged in smuggling goods and second-hand clothes from the neighbouring Zambia for resell.

The trade is risky as they often rely on canoes in crossing over to Zambia and coming back to the country.

“I used to work as a casual waiter at a hotel, and that job gave me enough to take care of my son as I could buy food, clothes, pay our rent and send him to school.

“We were however among the first group to have our contracts terminated in April (2020), and since then, I have been surviving by the grace of God,” Buta said in an interview.

Buta is renting a single room with her son, who is supposed to be starting Form One when schools open.

Her son was one of the many in Victoria Falls whose school fees were being paid through a bursary sourced by a local tour operating company from tourists, but the donors have since pulled out due to effects of the pandemic.

For Buta, selling second-hand clothes was the only fallback plan.

However, she must risk contracting COVID-19 or drowning in the Zambezi River as they cross into Zambezi.

“A friend introduced me to salahula (second-hand clothes) business. She told me they were crossing using canoes in Chisuma, and for a moment, I was hesitant because I fear deep water,” she said.

“I later told myself I had to do it because my son has to go to Form One. The risk of crossing the flooded Zambezi River is better than dying of hunger and my son failing to go to school,” said Buta.

Zambezi River is at its highest as water levels have increased significantly to more than 1,209 cubic metres per second compared to the same period last year (677m3/s), according to the Zambezi River Authority.

The Rafting Association of Zimbabwe (RAZ) says such a water level is dangerous even for guided rafting.

“Naturally, we would have closed rafting because sailing the river downstream the Victoria Falls is dangerous with this level,” said Skinner Ndlovu, RAZ chair.

Hoteliers and tour operators closed following restriction on international travelling. As a result, scores of workers had their contracts terminated while those that remained at work had their salaries cut because of lack of business.

The government has allowed the sector to reopen for domestic tourism, but there are no clients due to economic hardships.

“Tourism employed about 90 % of the Victoria Falls population, and more than three-quarters of these are now jobless, which has affected people’s livelihoods,” says Dzapasi.

Many have resorted to smuggling goods from Zambia for sale on the informal market.

However, the Chisuma illegal crossing point in the gorges is manned by police and army personnel who operate from an old camp in the area.

“We give them (police and soldiers) US$10 to be allowed passage using boats that carry people across to the Zambian side where there are taxis to Livingstone. It is like an official border.

“On my last trip, we were intercepted by Zambian police as we approached Lusaka, and we paid US$50 spot fines to be allowed to go,” says Fortunate Sibanda, one of those who have embarked into smuggling.

Some have become ‘runners’, a name given to smugglers who specialise in crossing the border to buy goods on behalf of others and charge them for transport and security.

Some of the smuggled goods are bales of second-hand clothes, illegal Bronclear (cough syrup), Zed and Tetankau, and skin lightening creams that have a ready market.

Some also cross to buy groceries as prices are lower in Livingstone compared to Victoria Falls.

Some have turned their house verandahs into informal shops from where they sell their goods.

“The camp was set-up to prevent crime, and we expect that to happen. People must also not risk their lives illegally crossing the Zambezi, that’s dangerous,” said the Chief.

This article was originally published by The Citizen Bulletin, a nonprofit news organization that produces hard-hitting, hyperlocal reporting and analysis for the southwestern region of Matabeleland. news@thecitizenbulletin.co.zw