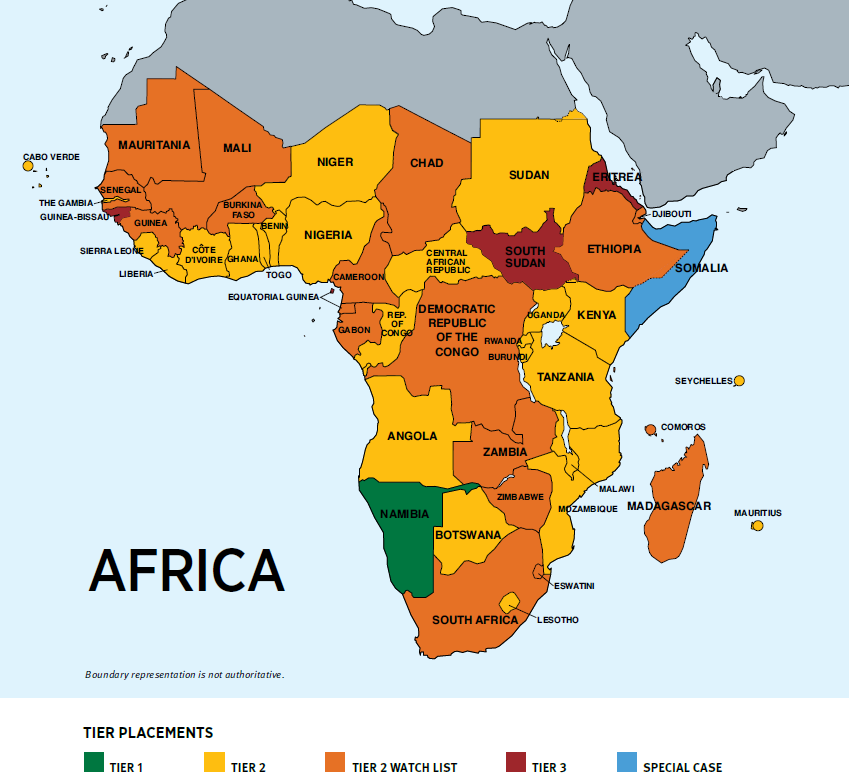 On 19 July, United States Secretary, Antony Blinken, delivered remarks on the newly published 2022 human trafficking report. In launching the annual report, from the U.S. Department of State, he said, “we’re releasing the 2022 Trafficking in Persons Report.  It assesses how 188 countries and territories, including the United States, are performing in terms of preventing trafficking, protecting victims, prosecuting traffickers. That makes this one of the most comprehensive sources of information anywhere on anti-trafficking efforts by governments.”

As it relates to Zimbabwe, the TIP report added Zimbabwe to a Tier 2 Watch List because, “The government of Zimbabwe does not fully meet the minimum standards for the elimination of trafficking but is making significant efforts to do so. These efforts included investigating and prosecuting human trafficking cases and conducting training for law enforcement, immigration officials, and other key anti-trafficking officials.”

Ten countries were downgraded from Tier 2 to Tier 2 Watch List.

Recommendations listed in the report include amending the anti-trafficking law to criminalize all forms of trafficking in line with the 2000 UN TIP Protocol, renewing, implementing, and allocating sufficient resources to the anti-trafficking national action plan (NAP), and expediting trafficking cases in courts to address the significant backlog of cases. Several other suggestions are published in widely publicized report.

The TIP reports states that the government “maintained mixed anti-trafficking law enforcement efforts” adding that, “For the third consecutive year, the government made no progress passing its 2019 draft Trafficking in Persons Act Amendment Bill. The government did not consult civil society during drafting, which several organizations viewed as an intentional move to avoid addressing deficiencies in farming and mining laws that facilitate forced labor.”

“Reportedly, senior government officials obstructed investigations into allegations of child labor violations on farms in Mazowe district,” the report says. In the prior year of 2021, the TIP Report found that, “an NGO assisted four potential labor trafficking victims allegedly exploited on a Member of Parliament’s farm; the government did not report any action to investigate the allegations by the end of the reporting period. Officials accepted bribes to not inspect farms and businesses that used exploitative labor practices. Observers reported that children taken to one of the government-operated vulnerable children’s homes were allegedly forced to work on citrus farms in Mazowe. Violent gangs forced workers into labor in some artisanal and defunct gold mines, operating with impunity due to their connections to police and local politicians who allegedly accepted bribes and allowed individuals to enter the mines and work without oversight. Trafficking victims reported law enforcement threatened and intimidated them when they tried to report their cases.”

In relation to Uganda and the Democratic Republic of the Congo, Secretary Blinken said, “Consider, for example, the Democratic Republic of Congo, that’s home to much of the world’s cobalt, which is a critical component for lithium-ion batteries for electric vehicles – something very important for our efforts to combat climate change. Some of that cobalt is mined by children, who are then pushed into work through coercion, through fraud, through force. I make this point because we need to be aware that as we tackle issues like climate and corruption.”

He commended South Africa and Uganda saying in his speech, “In Uganda, the government partnered with two NGOs to launch the Trafficking in Persons mobile app platform.  That helps investigators share details of cases they’re working on.  That helps bring more traffickers to justice.”

In relation to Ghana, acting director of the Office to Monitor and Combat Trafficking in Pesons within the State Department, Dr. Kari Johnstone, explained the status of the U.S.-Ghana initiative on child protection. “On Child Protection Compact Partnership with Ghana, we did have a multiyear partnership that is a time-bound partnership, so it has concluded. Our ongoing support and engagement and our foreign assistance to protect children from trafficking and increase the capacity within Ghana to also hold traffickers accountable – that work continues. The official partnership has concluded. We continue to expand our Child Protection Compact Partnerships with new countries around the world, and you will see another one on the continent soon.” The initiative originally ran from 2015 to 2020.

At the report’s launch ceremony, the State Department, Liberian Judge Cornelius Wennah, was honored as a hero of trafficking victims for his work whereby he developed, “a trafficking bench book for judges and a handbook for law enforcement and prosecutors—harmonizing international standards and local practice—without compromising on best practices, lessons learned, or international standards.”

The TIP report defines human trafficking as, “sex trafficking in which a commercial sex act is induced by force, fraud, or coercion, or in which the person induced to perform such an act has not attained 18 years of age; or the recruitment, harboring, transportation, provision, or obtaining of a person for labor or services, through the use of force, fraud, or coercion for the purpose of subjection to involuntary servitude, peonage, debt bondage, or slavery.

A victim need not be physically transported from one location to another for the crime to fall within this definition.”

Pearl Matibe is a Washington, DC-based foreign correspondent, and media commentator with expertise on U.S. foreign policy and international security. You may follow her on Twitter: @PearlMatibe